From Lambeth Marsh to Southwark Priory: a Meander

In Temse whan it was flowende
As I be bote cam rowende,
So as fortune hir tyme sette,
My liege lord par chaunce I mette;

So wrote one of my favourite poets, John Gower, in the 1390s, when a poet rowing down the Thames really could meet his monarch by chance and be summoned aboard the royal barge and commissioned to write one of the first great poems in the English language. It was to Gower’s London we went today, wandering along the South Bank from Waterloo Station, built in the 19th century on what had been, in Gower’s time, Lambeth Marshe, to Southwark Cathedral, once the priory where the poet lived out the last thirty years of his life. 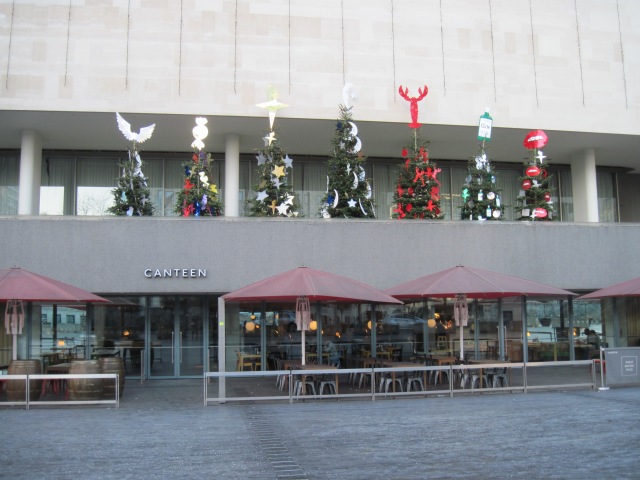 Here, outside the back entrance of the Royal Festival Hall, we spotted thus marvellous miscellany of Christmas trees. We also stopped here for a cup of tea overlooking the Thames on the other side of the building. 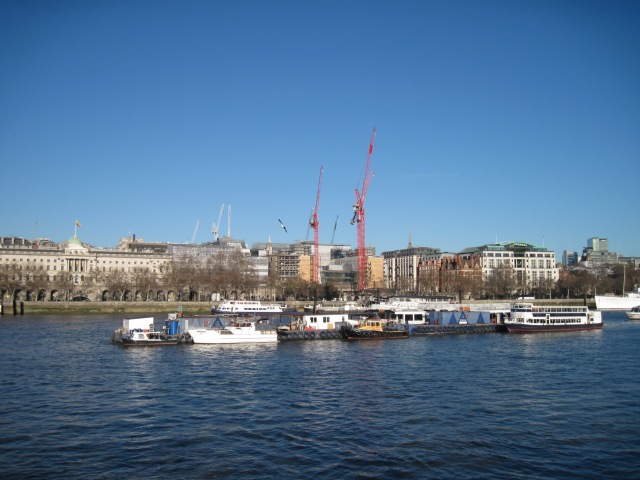 Looking over the Thames towards Somerset House. 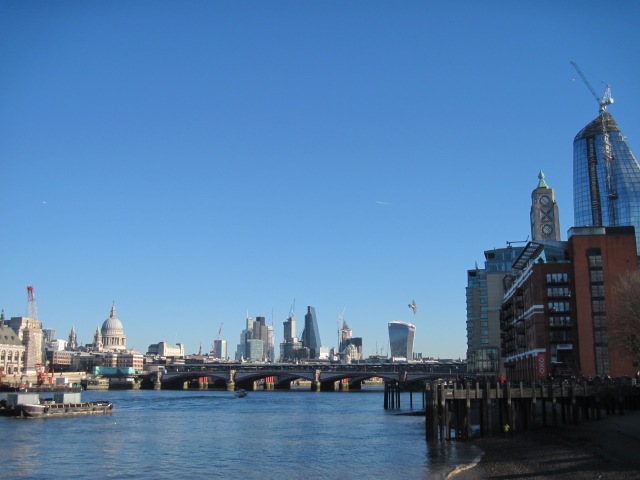 Towards the City, St Pauls, and Blackfriars Bridge, with bonus bird.

More shots of the City and some of the more bonkers buildings of the last two decades, including the Walkie-Talkie and the Cheesegrater. 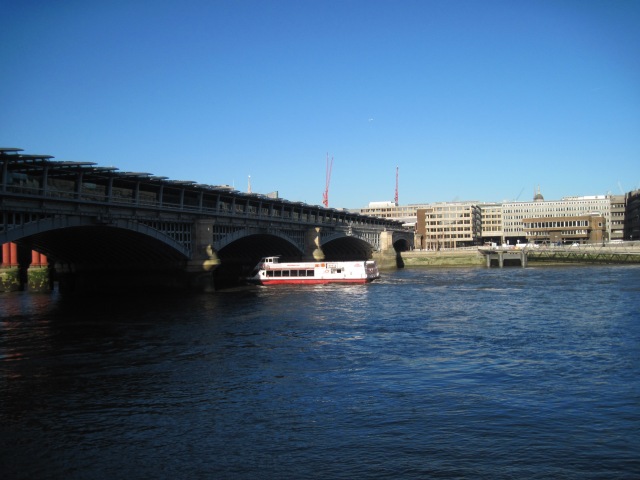 Ferry going under Blackfriars bridge, which is itself a railway station. 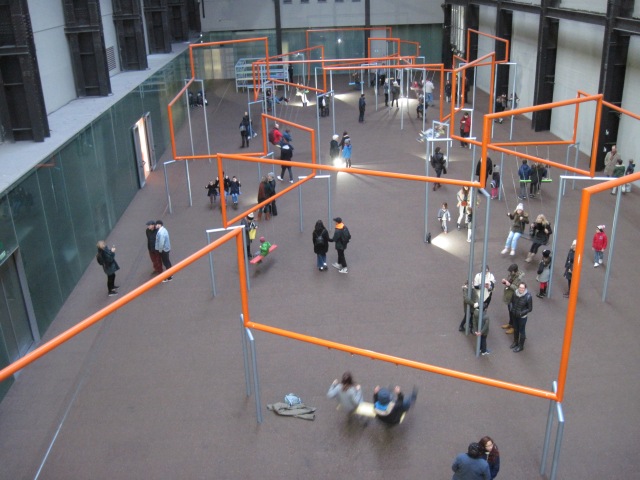 Inside the Tate Modern, where the current exhibition in the Turbine Hall is lots of three-seater swings made out of orange piping. I have no idea what the artistic significance is, but great fun was being had by all 😉 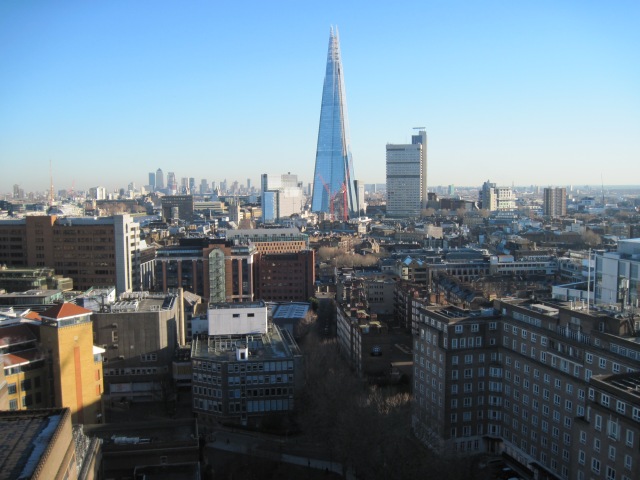 Once we’d had a go on the swings, I dragged Mum upstairs to look at the Living Cities gallery (aka the only one I like) and then we headed up to the viewing platform on top of the gallery. Here’s the Shard, one of the newest and most striking additions to London’s skyline. 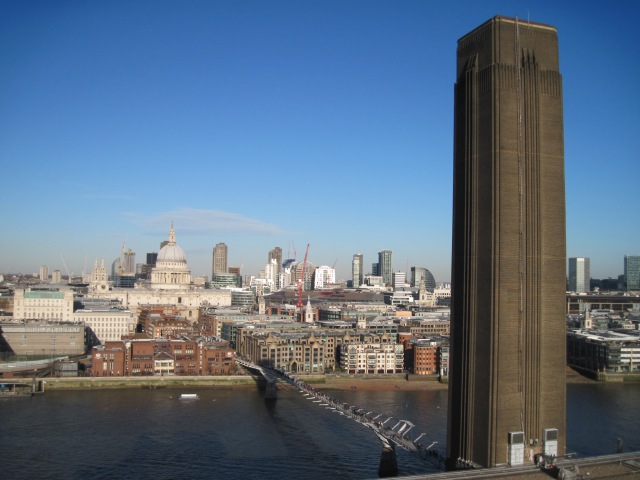 And here’s the boiler room tower of the Tate Modern and St Paul’s Cathedral opposite. St Paul’s still dominates the skyline, despite all the modern additions. 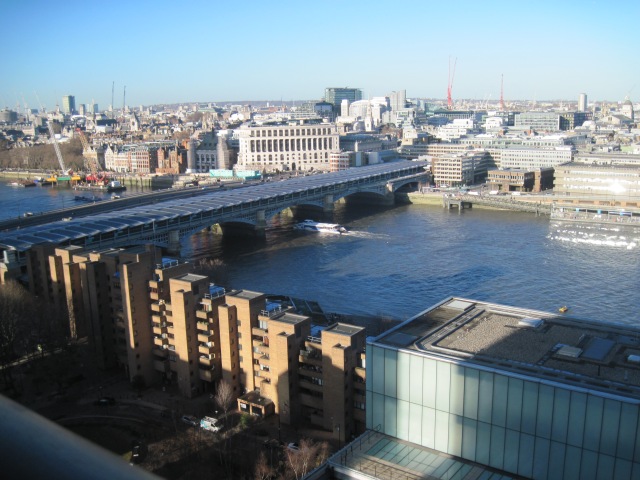 And looking back towards Blackfriars and distant hills beyond. 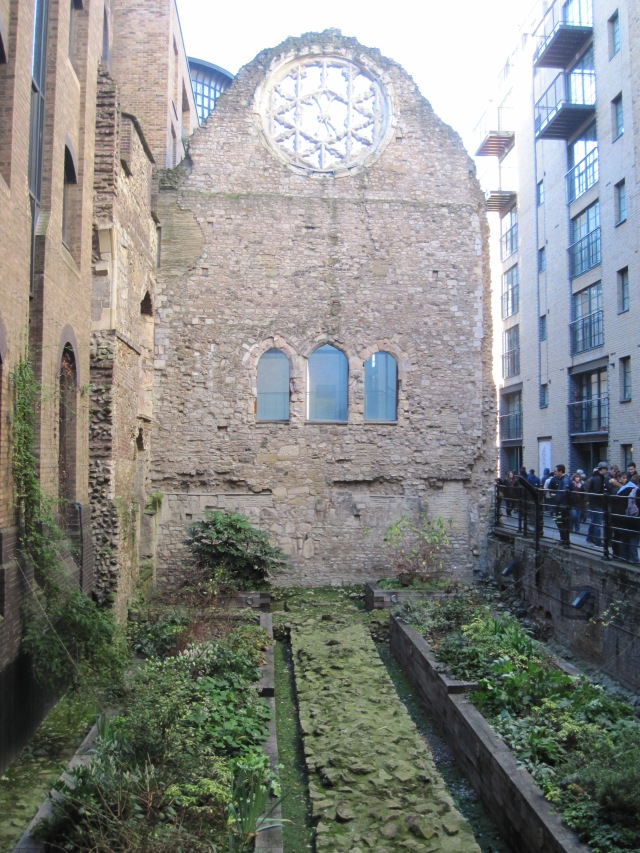 All of those cityscapes came well after Gower’s time, but this is a scrap of old Southwark–all that remains of Winchester Palace, once the London residence of the bishops of Winchester, whose diocese stretched as far as the south banks of the Thames. Southwark was not part of the city of London, then, but a lawless place packed with markets. prisons, brothels and actors (we’re only a few hundred metres from the Globe here). Here in the ‘Liberty of the Clink’ even the bishops grew rich on the wages of sin–so many brothels here paid rent to Winchester Palace that Southwark whores became known as ‘Winchester Geese.’ 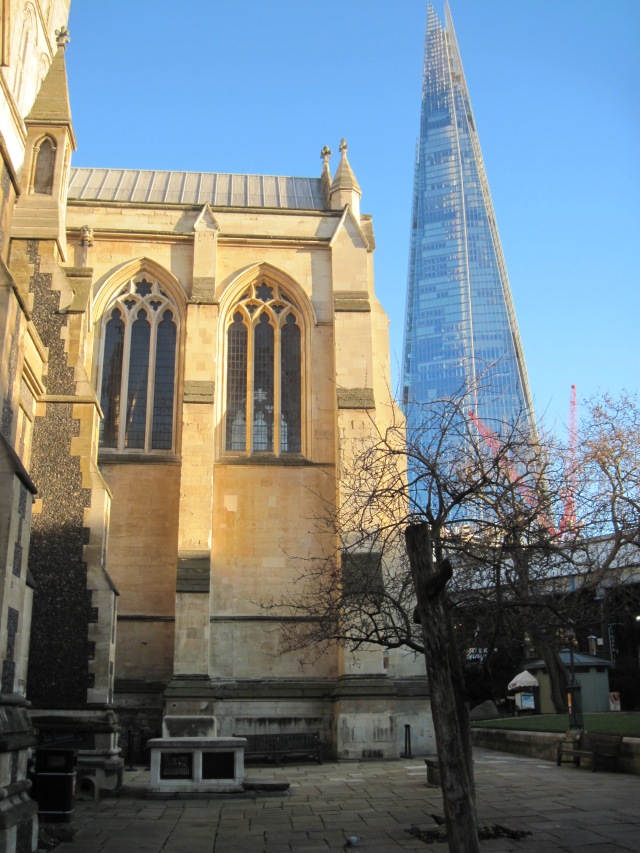 But amongst the chaos of Southwark stood a priory, which eventually became Southwark Cathedral in 1905, when it was decided that South London really wasn’t part of the diocese of Winchester (a city seventy miles away). Today it is tucked away between tall buildings–not the sort of cathedral that is as much tourist attraction as place of worship, but a quiet place of refuge from the busy city life. Here, in its churchyard, you can still get a sense of how little Southwark has changed. The herb garden here is hemmed in by the edge of Borough Market. The quiet of the cathedral gives way to the noise of the city and the railway line that passes within metres of its walls, and the air smells of meat and spices. I’ve been to a lot of cathedrals which sit gracefully in polite and restrained greens, but this felt authentic–surrounded on all sides by business and energy, its towers in the shadow of the Shard. They were all like this once. 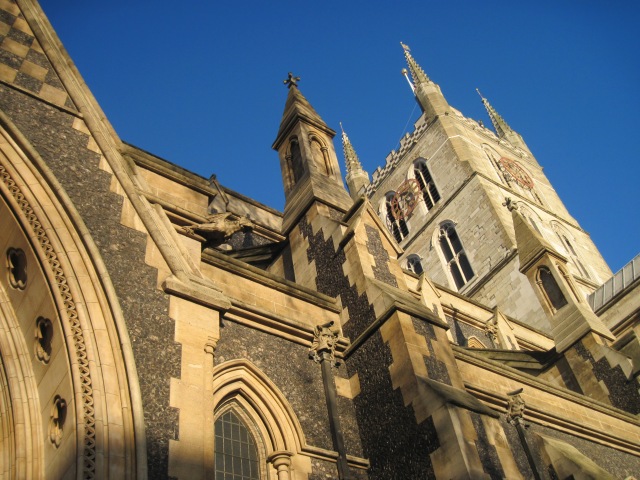 And, of course, I found a dragon–although I think this may actually be a proper London wyvern–and some marvellous gargoyles. 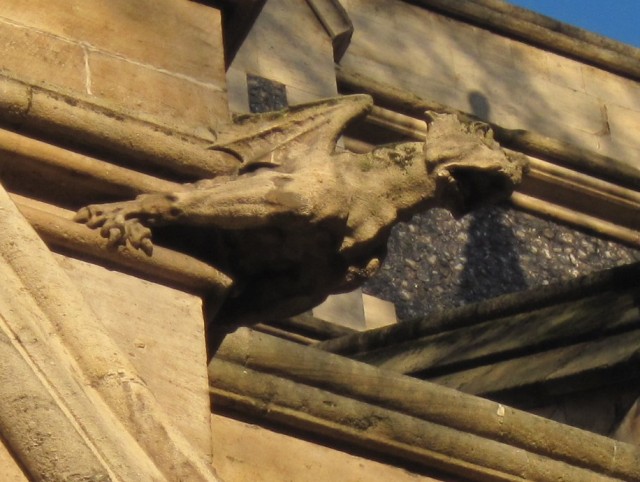 Here’s a close-up. Wyverns are the heraldic animal on the crest of the City of London and they appear all over the place–most notably as statues guarding the entrances to the City. 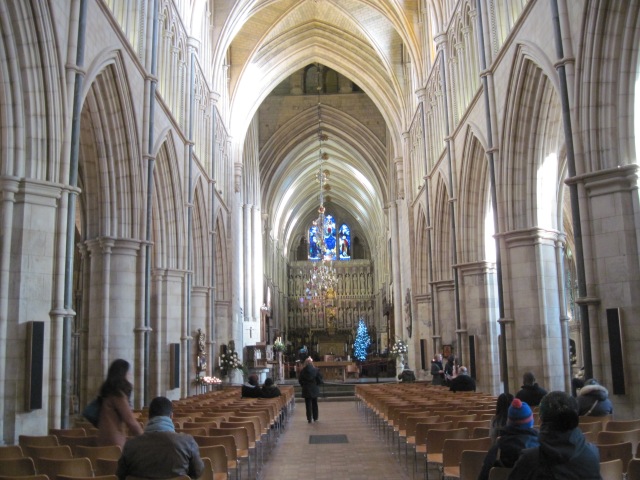 Inside the cathedral. This was for a long time simply the Church of St Saviour and St Mary Overie. 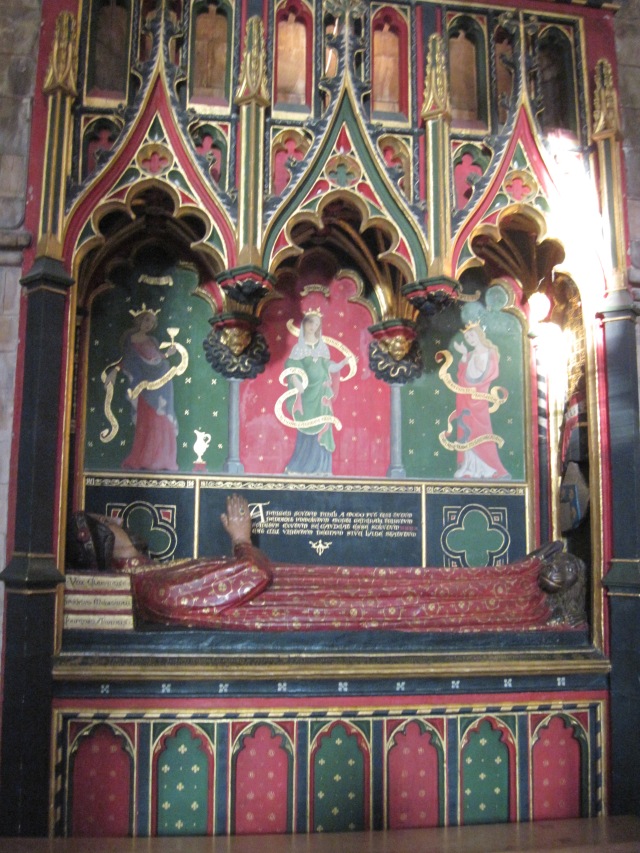 And here lies John Gower, London poet. His monument shows him resting his head on his three books (written in three different languages). It is unusual in so far as the colours have been kept renewed over the centuries so his tomb is just as bright as it would once have been. I’ve been wanting to visit here since I first read the Confessio Amantis in 2001. Opposite him, across the nave, stand a memorial to Shakespeare and his life in Southwark, and besides that one to Sam Wanamaker, who is responsible for the reconstructed Globe. Shakespeare drew on Gower’s work in writing his plays and Gower appears as a prologue in one of them, so it’s a very fitting combination. 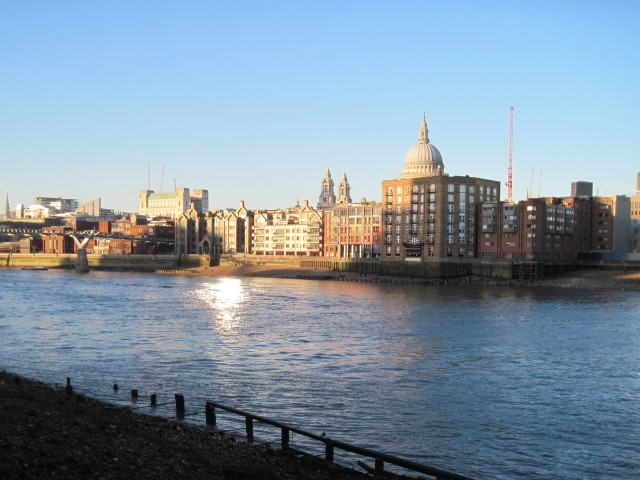 Back out on the riverbank, the light was starting to grow long and low and so we turned our faces back towards Waterloo.