One last meet the characters post, this time for a certain pirate prince. Recovery is now out! 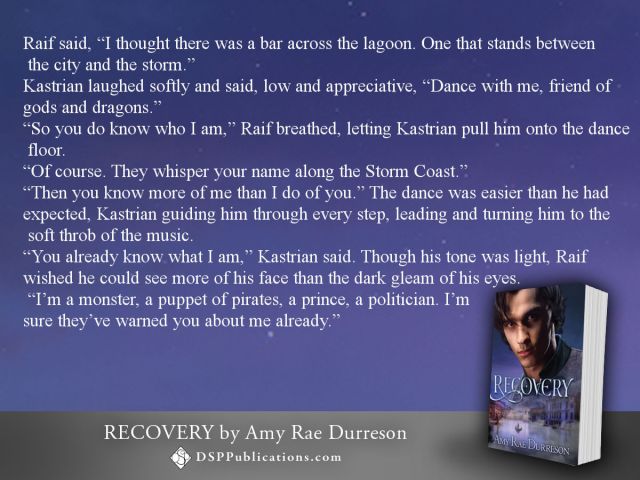 The wind, at least, was honest.

It blew clean towards Aliann and the north, carrying Kastrian and his ship away from the Isles as the sails strained above him and Conquest cut through the water as sharply as the weapon she was under the trappings of diplomacy.

Kastrian stood by her rail, half listening to the calls and banter of his crew, half recalling the islands they had just left—their bare golden cliffs, the forests of pine that crept across their hill tops, the pirates that lurked in their bays, demanding tribute of the fisher folk and the farmers.

Poor foolish land folk, he thought bitterly, who had still not learned to run as soon as the black ships came into sight.

“You going to open that?”

He hadn’t heard Rinor approach and he jumped a little.

“Sorry.” Rinor offered him an easy grin of apology and came to lean against the rail, breathing in easily. The wind caught his hair, lifting it off his forehead, and he laughed. “Good to heading home, isn’t it?”

Kastrian managed a careless-seeming shrug of his own. His secretary was only a few years his junior but sometimes he made Kastrian feel very old and very weary. “Aren’t the isles our home, our true and first hearth?”

Rinor’s smile didn’t fade but he met Kastrian’s gaze squarely. “I don;t know. Are they, Prince of the Sea?”

Young, yes, but the boy wasn’t stupid either. Kastrian stared back at him, neither of them speaking, until Rinor’s gaze fell away.

And wasn’t that something to be proud of—that he could still intimidate his closest employee, the only soul in Aliann who still had any trust in him.

Kastrian looked again at the same wooden chest by his feet, the one Gorlan had taken out of the safebox in his cabin and gifted to him with such a smile that Kastrian knew whatever it contained was a taunt, not the reward he craved most. He didn’t want to open it—didn’t want to see what his king had commanded this time. He said, because Rinor was also the only person left that he had even a scrap of trust in himself, “‘Beware of the gifts of kings.’”

“‘They come bound in expectations,’” Rinor said back. “Stop quoting the Book of the Dragon and get it over with.”

Kastrian couldn’t stop his mouth from twisting up in amusement. Before his nerve failed him again, he reached down and flicked the box open.

Inside a fold of leathery cloth covered something. A note sat atop it. It said simply, Wear this.

“Is that—?” Rinor started, his voice shaking.

Kastrian shook his head. “Goatskin. Look at the colour.”

“Our king likes to play games.” Kastrian tossed the note overboard, watching in satisfaction as the wind snatched it away. Then he folded back the goatskin and recoiled.

A mask looked up at him—a festival mask for a winter in Aliann, but one whose like he had never seen before, a blue-green monster with fangs and bulbous eyes, half-fish, half-lizard, all vile. Kastrian’s hands tightened around the coverings, every instinct telling him to hurl the thing overboard.

That was true, and Kastrian took three long breaths, forcing back decades worth of rage and hate again. He did not want to wear this thing—did not want to carry it into Aliann, the city which had always welcomed him.

“What is it?” Rinor asked, his distaste showing in his voice.

“A hydra,” Kastrian said, closing the lid of the box so he didn’t have to look at it. “You know the stories they tell of such things in Aliann.”

“He wants you to attend balls masked as their legendary foe? Is it meant as a threat?” Rinor looked puzzled. “That’s indirect, even for him.”

“A threat, yes,” Kastrian said, but did not elaborate. Rinor was still a relative innocent, a minor player in this dangerous game that he and Gorlan played in regard to the floating city. Rinor did not need to know that this was more than a threat to Aliann. It was a promise, one that could be already swimming in their wake or clinging to their hull, a promise Gorlan would force Kastrian to keep.

One which would destroy Aliann, if he couldn’t find someone to do what he could not. He could never be a hero for Aliann—would always be the monster from the sea.

Kastrian looked up, north to where the first hazy hint of the lagoon bar showed against the horizon, and hoped with all his heart, that someone there would be ready to fight him.

Every monster had its matching hero, after all.