A slither along the North Downs (Reigate Hill in February)

Earlier this week, I made it out for a day on the hills. I’d been craving a walk for a while and the weather and day job responsibilities had got in the way. I wanted to breathe in the sky and really, really needed to walk past the block I’ve had on my writing for a while. On a whim, I decided to do a bit of the North Downs Way, a section I hadn’t walked before from Merstham, near Reigate, back towards Dorking. The North Downs Way is usually one of the easier local walking trails, a clearly marked, much used trail along the top of the ridge.

Here, about a mile into the walk, you can see how lovely the day was. This early, the frost was still hard enough that the mud was the consistency of well-kneaded dough and barely sticky. Bad mud is always a risk when walking on chalk in winter, but usually once you’re up onto the exposed ridge it’s usually not too bad, especially on a cold day. 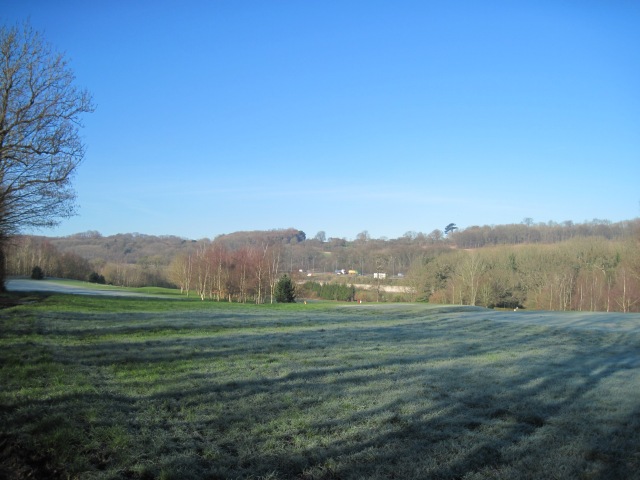 Despite the lovely misty hills, civilisation was not far away. In a cutting below the same hillside runs the M25, London’s orbital road, which is one of the busiest motorways in Europe.

Here, where the path rises into Gatton Park, is this circle of modern standing stones. Called the Millennium Stones, they were commissioned and created in 2000 as a touring art project, which found a permanent home here. Each stone is meant to represent 200 years of Christian history and has a quotation from a great thinker of that era inscribed on it in era-appropriate lettering–the earliest reads In the beginning was the word and the latest quotes T.S. Eliot.

A little further up the path, I stopped on a bench for a sip of water while I gazed down over Gatton Park, landscaped in the 1760s by Capability Brown. The trees here were deliberately planted on low rises to accentuate the natural curves of the land. You can see how the frost lingered in the shade.

Once I finally reached the top of the slope, I was finally on Reigate Hill. This is Reigate Fort, built in WW2 to be a marshalling point and artillery store in case of invasion. The North Downs are the last great natural defence to the south of London, and the plan was that defence forces would gather here and use the fort as a base to start constructing trenches along the top of the Downs. Even on a bright day, it’s still a bleak little place.

The fort isn’t the only reminder of the war on Reigate Hill. These two oak replicas of the wing tips of a B17G American bomber, which crashed here in March 1945. The distance between them shows the size of the bomber, and you can still see the gap in the trees created by the crash. There’s a board there with information about the crew, who were flying their thirteenth mission together. None of them survived the crash. Their average age was 21 (you can find out more about the crew and crash here) 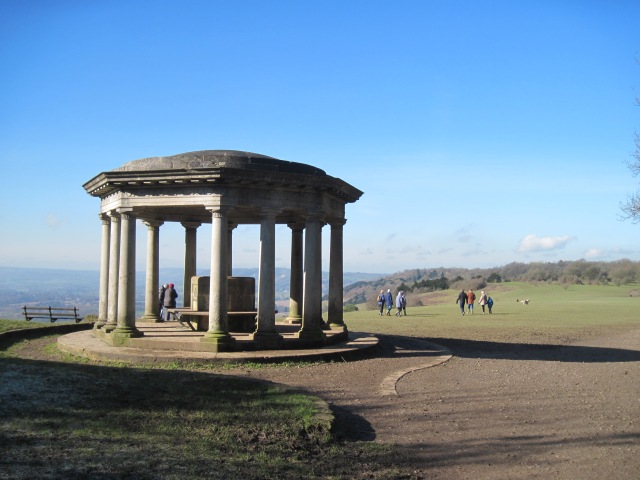 Finally, I came out onto the ridge at this little folly. It’s called the Inglis memorial and was originally built in 1909 as a drinking fountains for horses on their way to Reigate in the valley below. 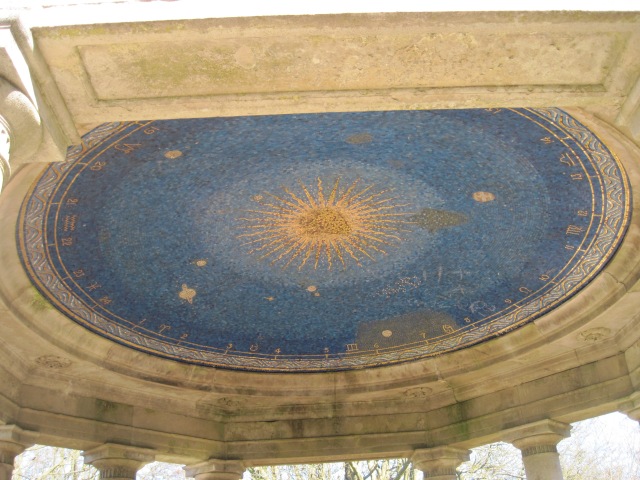 And this is the inside of its roof 🙂

Unfortunately, about a mile later, the walk went downhill. Literally. It was my own fault. I’d assumed it would be ridge-walking all the way, like the previous stretch of the walk from Guildford to Dorking. If I had checked more carefully, I would have seen that most of the walk was actually along the bottom of the ridge, just at the point where the escarpment ends and all the water draining off it hits the fields below.

That is, through mud. Chalk mud is the worst mud. Depending on how liquid it is, its consistency varies from grey soup to cement, and it’s slimy. It clings, it stains, it sends you to your knees and tries to eat your boots. After a mere half a mile, you start to think it’s actively malevolent.

And when the path is this narrow, it soon stops being fun.

This was where I gave up, when I almost lost my boots three times in four steps. The next bit of the walk was due to be a very steep uphill climb through this kind of mud, and since my story had come clear in my head again, I decided honour was satisfied and turned downhill to the nearest station.

The first few miles of the walk were fantastic and the second half I didn’t get to is supposed to be one of the best stretches of the trail, so I will try it again, but I’ll do it in summer, when the earth is bone dry.

Now, if you’ll excuse me, I need to check my boots again and see if they’ve dried enough that I can start scraping off the inch of mud currently adorning them.