The Week That Got Away (surgery and second editions)

I’m currently feeling very, very lucky. This week could have been the week from hell, and instead, everything is okay (better than okay in some areas). So, let me catch you up.

First, I’m delighted that Reawakening is available again! The second edition was released from DSP Publications on Tuesday. The relaunch seemed to go very smoothly, and needed very little input from me, thankfully, as I had other things on my mind. I’m happy to see it back in circulation. The new edition only differs from the first in one area: it has an extra bonus story at the end. “Reemergence” is a tiny sequel about what Tarn’s hoard did next, and it introduces one of the main characters of Resistance.

On a less positive note, the reason I wasn’t shouting to the rooftops about the release was because on Monday afternoon I went under general anaesthetic to have surgery on my right retina. I lost most of the sight in that eye at the start of the month, due to a complication of diabetes, and got caught up in the NHS at its most brilliantly and bullishly efficient. The whole process was weirdly fascinating, especially as I’ve been in no pain at any stage of it, and I took a lot of notes. I also got to visit a new and interesting hospital, and somehow managed to fit in a museum visit and a fair bit of sightseeing around the medical stuff (I blame my mum for this, partly because I got the ‘while we’re here we should really go and see…’ genes from her, and partly because she was the responsible adult leading me around London this week (literally, at some points, as I couldn’t get my glasses on, which effectively made my good eye useless too).

So, here are some photos of a neat bit of London and lots of waffling about medical history which I think is a very cool subject, having written both fantasy and science fiction doctors in the last eighteen months (and there have been a couple of times in the last few weeks where I’ve imagined Hal and Reuben standing behind my shoulders). Any gruesome medical details are historical, not from my own experience (although I’ve been hanging around hospitals since I was a baby, so my ‘gruesome’ may not be the same as yours)

This one was taken almost two weeks ago, when I first went up to London to see the specialist (I’d been sent on from my local hospital by then). This is the avenue of trees leading to the London Eye and those are fake bats. When I spotted the first one, I actually thought it was a dead pigeon, until I realised how many of them were there. One of the more effective bits of Halloween decoration I’ve seen this year.

Westminster bridge on the same day. Given this is the iconic London shot, I was taken aback by how long I had to stand there before a red bus went across it.

St Thomas’ Hospital is just beyond Westminster bridge, about five minutes walk from Waterloo, the station where I come into London, which was handy (both my dad and brother have ended up being referred to London hospitals in the suburbs in recent years and they’re a pain to get to). It has a fascinating history. As an organisation, it has existed for centuries–it is thought to have been named after St Thomas Becket and was already being referred to as ancient in 1215. Originally, it was a hospice for the poor and sick, run by Augustinians. In the early 15th century, the Lord Mayor, Richard Whittington (yes, that Whittington) endowed a lying-in ward for unmarried mothers, and it gradually grew and grew, spawning a sister hospital, Guy’s, and eventually being forced to move to its current site in the 1870s. It now stands on the bank of the Thames right opposite parliament and is a major research and teaching hospital. It’s huge, and must have one of the best views of any hospital in the world. I am very glad I ended up there, because they were superb.

On the day itself, we ended up in London with about an hour and a half to spare, and since it was such a lovely day, walked a slightly longer route, over the Jubilee Bridge, along the embankment and then back over Westminster bridge. It’s probably about a mile’s walk but you could spend all day taking in the history and views. Here’s a few highlights.

Looking over the Thames from beside the London Eye. Since taking this picture, I’ve been reading about the amazing Tower Lifeboat that covers the Thames through central London (it was a tangent from a tangent from my main research) and now know that this is one of the dangerous points on the Thames, because if a swimmer gets trapped behind that barrage, the lifeboat can’t get in close to help them.

This is the Hungerford railway bridge, flanked by the two Golden Jubilee footbridges. We decided to cross on the other side of the railway, so we could enjoy the view of the City of London. 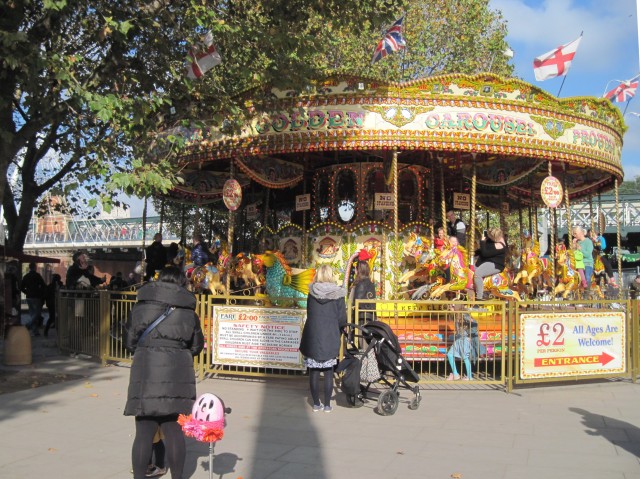 Before we got there, though, we passed this busy carousel. You can see just how crowded the South Bank gets in half term! 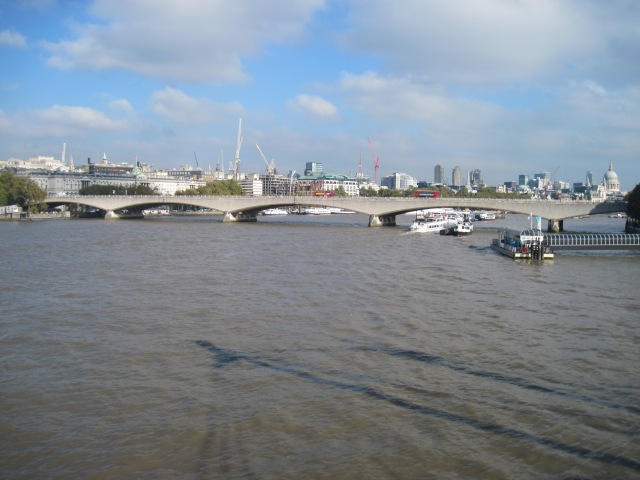 Looking downriver, with Waterloo Bridge in the foreground, St Paul’s to the right, and the London skyline. 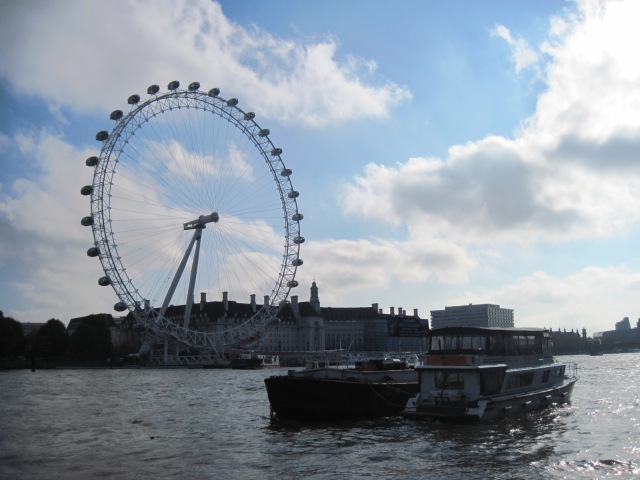 Looking back at the Eye from the other bank. The square modern building above the boat on the right is the hospital. The eye ward is up on the 8th floor, with views down over Westminster Bridge (and, yes, we were fully aware of the irony of putting patients who can’t see into a room with one of the best views in London).

The Battle of Britain memorial. This week was the 75th anniversary of the end of the Battle of Britain. We watched the memorial flight go over us from school a few weeks ago, and it’s something everyone in the UK knows about. Many of the buildings in my earlier pictures were severely damaged in that dreadful summer and autumn, and many of the more modern buildings stand in the places where older ones were destroyed. Even St Thomas’ hospital was heavily bombed (you can read a firsthand account of one of the bombings here), and a core group of surgeons kept going with life-saving operations in the basement even when the hospital was left with no electricity, water or lights (they sterilised their instruments in the flames of camping stoves). 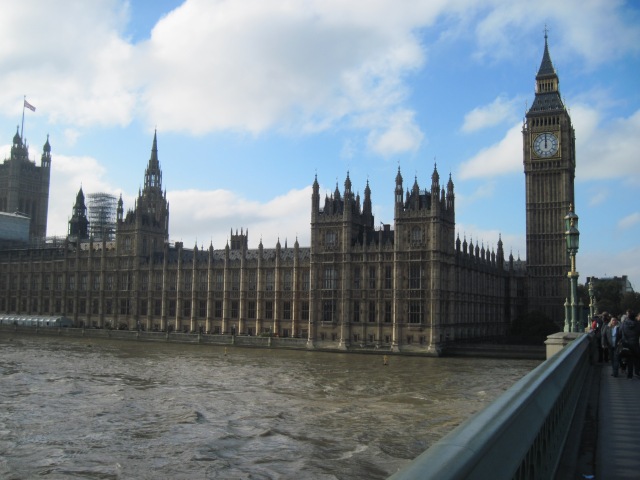 Crossing back over the river, having fought our way through the horde of tourists trying to take pictures of Big Ben striking noon. I’m glad to report that its hands didn’t fall off and we were far enough away that it didn’t leave our ears ringing (it’s really, really loud when you’re this close).

We had half an hour to get to the hospital and up to the eighth floor and I was wheeled off just before two. All went as smoothly as it possibly could (I assume from the aftermath, since I was out cold). I got back to the recovery ward just as it was getting dark and lay there for a while listening to Mum rhapsodize about the night view I couldn’t see, and pop in and out to catch up with all the cataract patients she’d befriended in the waiting room. I was on my feet by eight and we walked back to the station. The only difficulty was that the dressing they’d put on me was so big I couldn’t get my glasses over it and I’m incredibly short-sighted. Anything more than a metre away was either a blur or an enormous sparkly blur in the case of lights. It made getting back to the station interesting, but I can report that the London Eye looks fucking awesome when all you can see of it is a ring of vast multi-coloured sparkles (this may be the general anaesthetic talking).

We went back the next day to have the dressing removed and my sight was almost completely clear (I have some very slight blurring around the edge still, but that should heal). So we went sightseeing, since I finally could see. I dragged Mum around the exhibit on the history of the hospital (in the 17th century, I discovered, a pioneering surgeon who wore a turban was able to prove his headgear saved lives, mostly because his colleagues just kept on wearing their usual filthy wigs as they operated). She then dragged me away for coffee and then we went around the Florence Nightingale museum which is also on the site. We also got to appreciate some of the beautiful tiled pictures which are mounted along the main corridor and gladly spent some money in the little shop which raises funds for the hospital. We’ve both seen a lot of hospitals in our lives, and were impressed beyond words with how calm, capable and caring all the staff at St Thomas’ were.

You can buy a set of postcards of the tile paintings which hang around the hospital. These were originally commissioned from the Doulton China company to decorate the children’s wards which opened in 1901 and 1903. They show scenes from fairytales and nursery rhymes and could be easily cleaned, being made of tile. The wards were damaged in the bombing in WW2, but the tile paintings were rescued and rehung in the modern hospital when it was rebuilt. I’d seen several walking around the hospital and had been charmed by them, so was delighted to get the full set. From the top: Red Riding Hood x2 2nd row: Sleeping Beauty x 2; Rock a Bye Baby; Bo Peep x 3 3rd row: Cinderella x 3; Jack and Jill x 2 (both on their way up and rolling back down the hill); Little Jack Horner 4th row: Puss in Boots x 2; Miss Muffet; Dick Whittington x 3 (yup, him again) Bottom: Babes in the Wood; Billy Boy Blue; Old King Cole; Jack and the Beanstalk

We then toddled back over Westminster Bridge and along Whitehall to have lunch in Trafalgar Square (soup in the Cafe in the Crypt was exactly what I needed). I spent the next few days at my parents, where the highlight was the homemade get well cards from my nephews which appeared in the post. I’m now home and, apart from having the energy levels of a twice-brewed teabag, feel perfectly fine.

I’m well aware that I got off incredibly lightly, and am very grateful to everyone who has helped me out, from my colleagues at work who have cheerfully merged and reorganised classes to allow for my absence (and who will continue to do so next week) to everyone at Dreamspinner who shifted deadlines and fixed problems for me (my editor is amazing). I’m hoping I’ll be back at full strength soon.

And, here, to finish are my get well cards XD

There was a rainbow on the front XD

Like Loading...
This entry was posted in announcements, photos, writing and tagged new release, reawakening, resistance, writing. Bookmark the permalink.