An Upcoming Release and Easter in the North East (Ten Castles Tour, Part 1)

For the last few weeks, I’ve been so busy that I keep forgetting that I was on the road only a month ago. This year’s great adventure took me north, on a route from York to Edinburgh, via visits to ten different castles, two cathedrals, two railway museums, three cities, and a Holy Island, all by public transport. Over the next few weeks, I’ll be sharing a few highlights of my trip.

I’ve also got a new release coming up. Lord Heliodor’s Retirement will be part of the Dreamspinner June Daily Dose. The theme this year was older men. I was lucky enough to feature in their earlier anthology on the same theme, Snow on the Roof, and was very excited to write for this one. The gorgeous cover (created by Catt Ford) and the blurb are below:

Unlikely hero Lord Adem Heliodor saved his queen’s life during the Screaming, a magical attack on his city, but his broken nerves have forced him into an unwanted early retirement to his country estate. Adem thinks his life is over, but retirement holds some surprises. First, there’s his new librarian, who turns out to be not just the first love he thought was dead, but also someone surprisingly knowledgeable about political intrigue. Then there’s the assassin in the orchard and the discovery that the Screaming was just the first attack on the city.

You can buy the whole set now, or wait for individual titles to become available on June 1st.

I arrived in York just after 11am on Easter Saturday. I had been there once before, for a desperately needed day off about ten years ago, but the one major attraction I had run out of time to see then was the National Railway Museum. I love steam trains. It’s in my genes, I think, as my grandfather worked on the railways all his life, and I was brought up to appreciate our railways. Something in my heart lifts at the smell of steam and the distinctive sound of a steam locomotive huffing its way across country. The National Railway Museum in York is home to over a million pieces of railway memorabilia, from great locomotives like Mallard, whose 1938 world speed record for steam locomotives has never been broken, and the stunning Art Deco Duchess of Hamilton, to signals and sign boards and station furniture and all manner of weird and wonderful stuff. 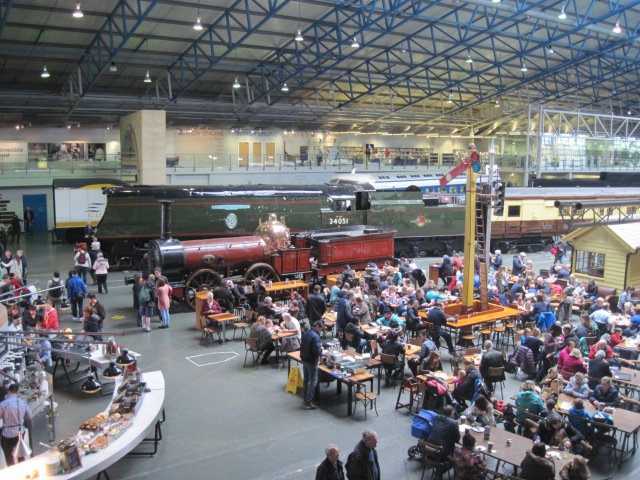 On Easter Saturday, it was absolutely heaving with people, as you can see. This is just a glance down at the corner of the main hall. 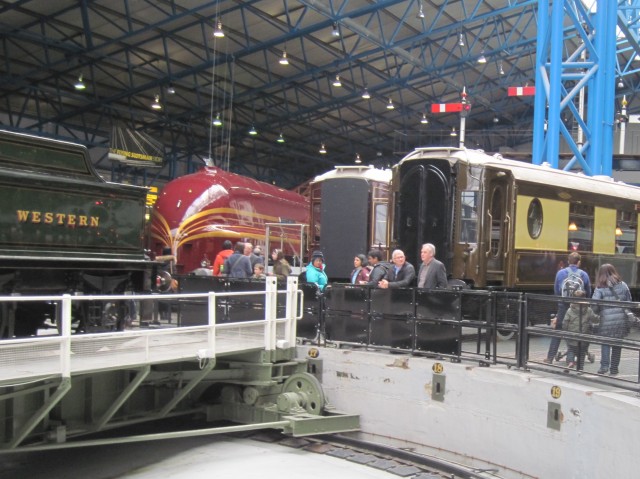 Many of the locomotives are positioned around the turntable towards the back of the hall. The red train is the Duchess of Hamilton, who is polished to such a sheen that all this is the only one of the pictures I took of her that is actually in focus.

And this is Mallard, the fastest steam train there has ever been. Built in 1938, she was four months old when she broke the record, travelling at 125.88mph, just south of Grantham. She’s got a plaque on her side to celebrate her achievement and is one of the undisputed queens of the museum’s collection.

The museum also works to restore and preserve locomotives and rolling stock. This is peep down into their engineering bay. Up in the gallery you can also watch a live display of platform and line availability for the trains coming into York station and try to figure out the logistics of keeping them all moving on time.

My favourite part of the museum, however, was the warehouse. Here they store all the items they have collected but not yet restored or investigated. They’re piled up in row upon row of signage and signals, seats and station silverware, models and memorials and some things which baffle the imagination. I was delighted to find the signs of many stations I have visited on my travels around the UK and intrigued by a memorial from my home town of Reading, in remembrance of a poor young chap who was killed in a whirlwind in 1840 (in Reading, which was then a very ordinary home counties market town!). 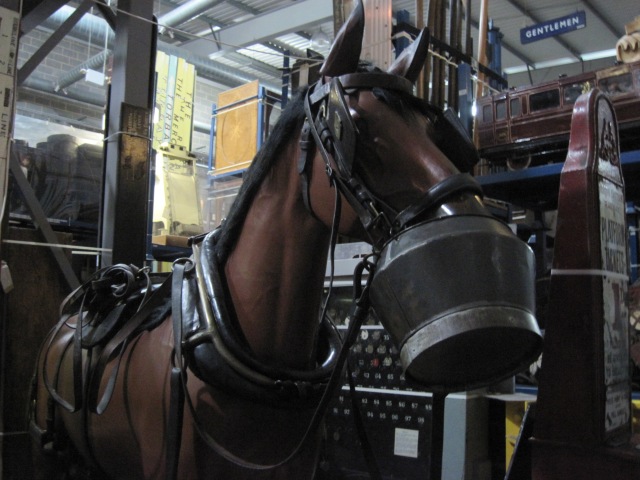 Also, a model horse (nope, I’ve got nothing. No idea).

This chap, however, is a collection dog. They were very popular from Victorian times until the 1950s, and wandered around major stations collecting donations for railway charities. There was a fantastic article about them on the BBC News site last year. Click on the picture to read it.

I eventually tore myself away from the trains to go in search of lunch. I ended up just wandering around York for the rest of the afternoon. The queues to get into the various tourist traps were huge, and it was too nice a day to queue for a hour to go inside or underground. This is the Shambles, one of the little old streets which date back to medieval times. I didn’t try to go along it, not with my full backpack on. 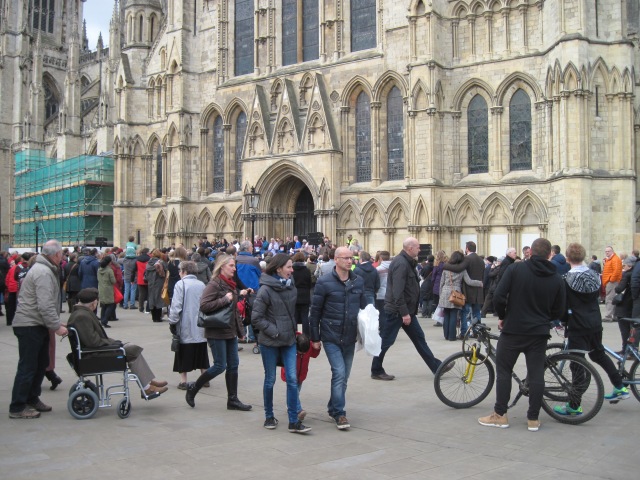 Round the back of the Minster, they were celebrating the Easter weekend with Christian rock and outside baptisms. You may just be able to see Archbishop Sentamu in front of the doors (all in white, of course, just left of the lamp post).  It wasn’t a very warm day for it.

The whole city was heaving with people, and eventually I escaped down to the riverbank, sat down for the first time since I’d got off the train (I’d eaten on the move about three hours earlier) and caught my breath. Once I’d rested my feet for half an hour, I toddled up to the Yorkshire Museum to see their Richard III exhibition and goggle at their fossilised ichthyosaur, which is the closest I’ve ever seen to a real dragon.

I ended my day in York after that by making my very weary way back to the station (I later found out that I’d walked almost eleven miles that day without realising) and caught a train to Scarborough, where I was staying in a Youth Hostel a few miles outside town. I’d been here before, on another trip and was quite pleased by how easily I remembered the slightly complicated route from the bus stop.

The next morning, I set out very early to walk the mile or so across the fields to the cliff tops, where I had my breakfast gazing out towards Scarborough Castle on the next headland to the south. It was still very early and very quiet, but that wouldn’t last. To spend a bank holiday weekend at a seaside resort is to become just one tiny part of a very vast crowd. 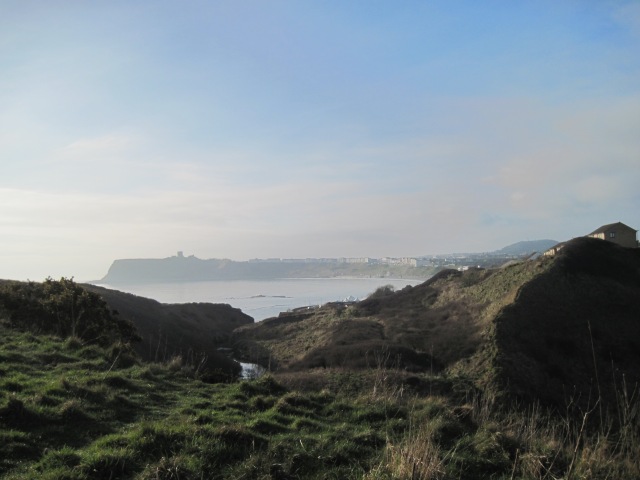 The view from my breakfast spot.

Scarborough’s North Bay. The town is situated on the headland between two bays. The headland itself has been used since Roman times and houses the ruins of one of Henry II’s castles. North Bay is mostly beach and holiday accomodation, whereas the harbour and the older parts of the resort are on the South Bay. This is the mouth of Scalby Beck. The hostel I was staying in was the old watermill on this river, in a sheltered spot further inland. 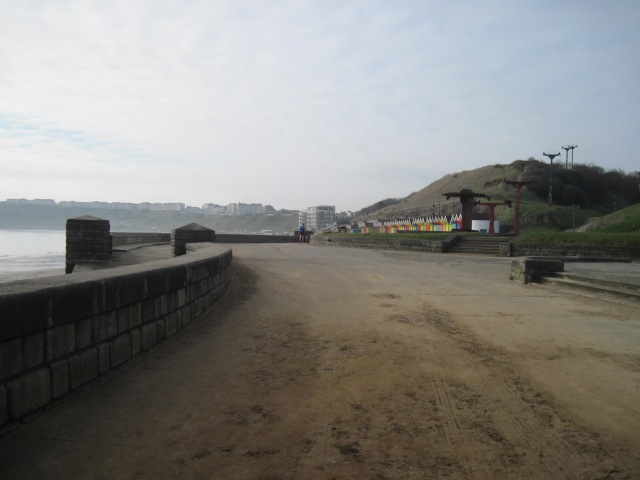 This early, with the mist still clinging on, it felt a little eerie.

The morning clouded over after that, and I decided to wait and visit the castle later. Instead, I hopped on a open top bus and went round the whole route, listening to the history of Scarborough. As I did, the town began to fill up, with motorbikes, beachgoers, and day trippers. At the end of the tour, I braved the crowd to buy some chips and then headed up the headland to the castle. As I did, the sun came out.

Looking back over North Bay from the castle. The waves here are amazing.

Here’s the castle itself. Built in the most strategic position, of course. The keep was built in the 12th century by Henry II, but it remained important for centuries afterwards. It was besieged twice in the English civil war and last saw battle when it was shelled by the German Navy in the First World War (hence the missing bits of the keep).

Much of the headland is grassed over, and you can wander along the edge to enjoy the views. Here’s the view to the south, including a ‘pirate ship’ harbour cruise. 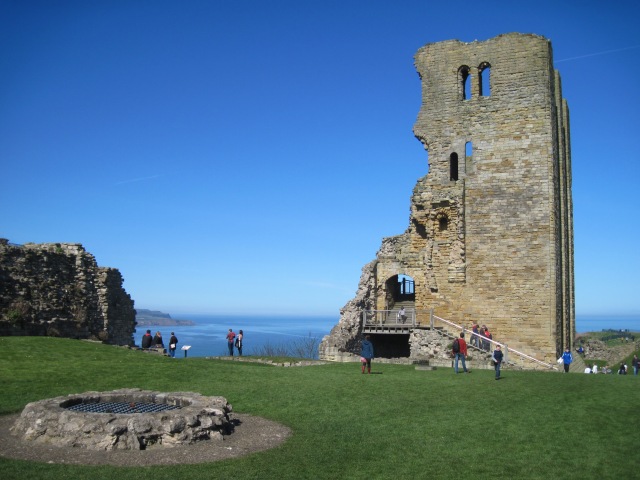 The keep from the side.

The south bay and the harbour. Even from here, it was obvious how very busy the town and beach had become.

In a churchyard just below the castle walls lies the grave of Anne Bronte, who died here on 28 May 1849. Her sister Charlotte, who was with her, decided to ‘lay the flower where it had fallen.’ I was pleased to see the fresh flowers. It’s a very lovely spot on a sunny day and you only have to raise your head to see the sea and the castle walls.

Back down on the seafront, things were very busy. I got back onto a bus to go round the headland to the other bay, but we pretty much crawled along at walking speed anyway!

Back where I had started, the eerieness of the morning had long vanished. I bought myself a cold drink and wandered back up the clifftops where I sat and read until it started to get cold.

I’d had a wonderful day in Scarborough and was well and truly in holiday mode. The next day, I would be heading inland again, towards more castles and the edge of the Yorkshire Dales.

Like Loading...
This entry was posted in announcements, inspirations, photos, writing and tagged lord heliodor's retirement, travel. Bookmark the permalink.