A Midwinter Meander Through London

Ten years ago, I worked in an office near Gray’s Inn. I commuted, first from Surrey and then from Cambridge, and every morning and evening I would avoid the ghastliness of the Tube at commuter time by walking to one of the big mainline stations in London. I used to walk past lots of tiny little museums and quirky places, but never stopped to go in. Over Christmas, I was chatting to my mum, who had recently done a walking tour of London which had whetted her curiosity, and I mentioned how much I regretted missing out on all those places. It took us about twenty minutes to find a day when we were both free and so last Friday we headed up to London.

The original plan was to walk from Waterloo Station to King’s Cross via two museums, Sir John Soane’s Museum and the Foundling Museum in Coram Fields, then on past King’s Cross station to the London Canal Museum and St Pancras Old Church. That plan didn’t quite work out, since we acquired a three-year-old along the way, but our route was still a wander through some of the lesser known quirky corners of London.

We started by crossing Waterloo Bridge, which I firmly avow offers the best views of any the great bridges across the Thames, upriver towards Westminster and downriver to St Pauls and the startling architecture of the city. If you access the bridge via the underpass from Waterloo, you will have the chance to read Sue Hubbard’s beautiful poem Eurydice, which is a stunning evocation of London.

From the end of the bridge, we wound our way up along the Strand and through the London School of Economics towards Lincoln’s Inn Fields. We wanted to visit Sir John Soane’s Museum, which is meant to be one the most eccentric art museums in London, but my sister texted as we were almost there to tell us she was on her way into London with my three-year-old nephew and could we meet up. Since the queue for the museum was already thirty people long, we decided to skip that one in favour of heading north to meet them for lunch. We swung up through Lincoln’s Inn, one of the four Inns of Court. This was true legal London now. The Inns are ancient institutions, dating back to the fourteenth century when they were professional colleges in the heart of London. Even today, all barristers in the UK belong to one of the Inns. To even qualify as a barrister you have to attend a certain number of social events in your Inn. The Inns themselves are home to the chambers of high-profile legal companies, as are the surrounding streets.

This is the Undercroft in Lincoln’s Inn. In the 18th and 19th century, unwanted babies would be left here and adopted by the Inn. They would be brought up as servants of the Inn, and were often given the surname ‘Lincoln.’

From Lincoln’s Inn, we emerged into Chancery Lane, crossed High Holborn, cut across Gray’s Inn and within minutes we had left legal London behind.

Bedford Row, just north of Gray’s Inn. All of these buildings are chambers, with the names of the lawyers posted outside the doors.

Crossing a road in London brings you to a new world. Five minutes north of Gray’s Inn, the law offices are gone, and there are hospitals on each side. Then you reach Coram’s Fields, home for the Coram Foundation, one of the oldest children’s charities in England, founded in 1739 to provide a home for abandoned children in London. These days the Fields are open to children (adults are only allowed if they have a child with them) and the charity continues to help vulnerable children. There’s a little museum there which combines displays on the history of the Coram Foundation with an amazing art collection. Throughout their history, they encouraged artists to display their work at the Foundling Hospital. Wealthy visitors would come for the art and donate to the charity, and the artists benefited from the display space and the publicity. They still work with artists today.

Ten minutes walk brought us to Kings Cross, where we met my sister for lunch. She’d treated my nephew to a trip on the Tube (so exciting if you’re three), and been round Camden Market. We left Mum to look after my nephew and snuck into the Harry Potter shop (ghastly and overpriced) before we all headed to the Canal Museum, which was lovely and very child-friendly (my nephew loved the fullsize model barge so much he declared that he was going to live there from now on). The museum is in an old Ice Warehouse on the Regents Canal, once the base of one of London’s early ice cream entrepreneurs.

My sister left us there, and Mum and I headed off to find our way through the back streets to St Pancras Old Church. We ended up walking along the Regent’s Canal as the day began to fade. 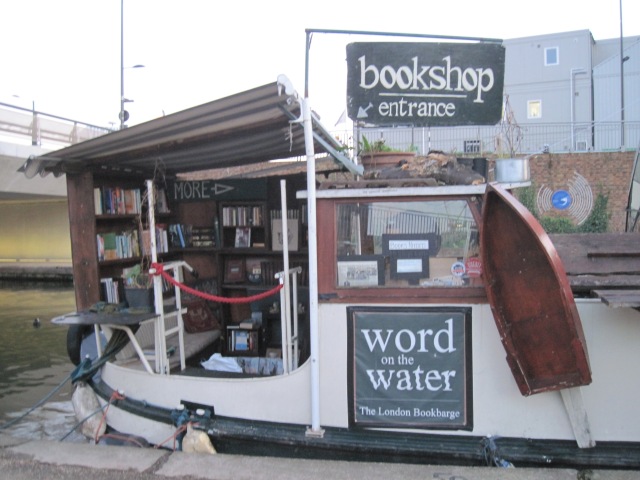 We were rather disappointed that this was closed. 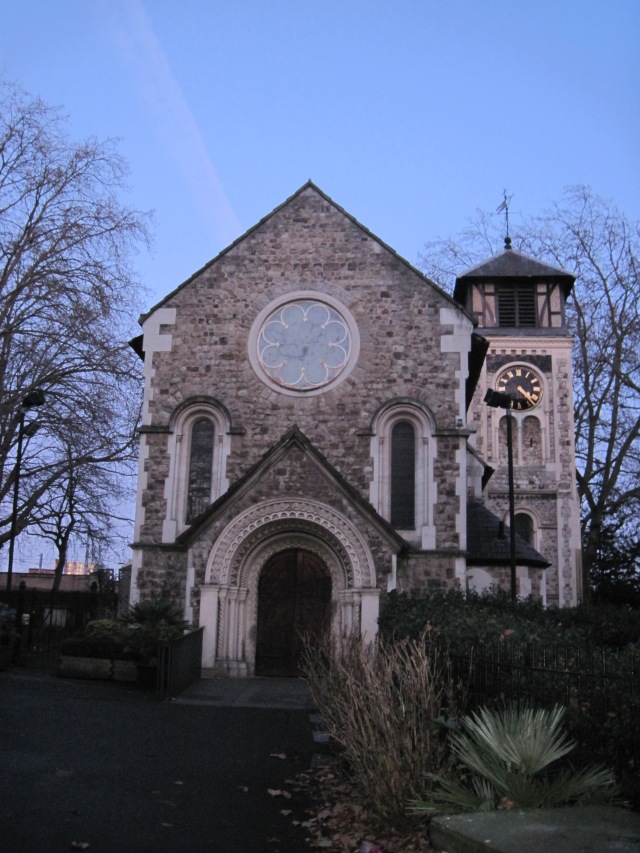 St Pancras Old Church is supposedly one of the oldest sites of Christian worship in the UK. Sadly, when we got there, it was closed.

We finished our day by getting a train down to Blackfriars on the banks of the Thames and a riverbus back to Waterloo. By then it was dark, but the Thames is always illuminated by night.

Blackfriars Bridge and the Shard behind it. 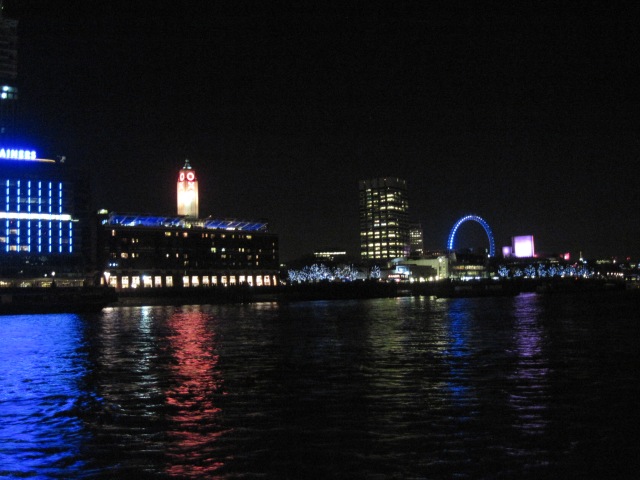 The South Bank and the London Eye

2 Responses to A Midwinter Meander Through London