I was surprised to realise that it had been just over a month since I wrote the first half of this piece. Term has started again, and suddenly time is stretching out in that strangely flexible way it always does when you’re a teacher. The start of September feels a lifetime ago, the summer is another country (they do things differently there), and yet everything on my non-day job to-do list is still there, dust collecting in the curves of the letters. I’ve never started wanting a new job so early in the school year before, and this time I may need to scrape out some time to actually design an escape route, because I’m sick of working twice as hard as I need to because the people who should be running things are distracted or incompetent (I know, I’m whinging again, but a month into term we still don’t have a functional timetable, and the entire school has run out of glue sticks, photocopier paper, and chairs–it seems the budget won’t go that far, despite the fact that it could fund refurbishing the finance office with brand new desks, computers, and luxury carpets).

Part of this is culture shock, of course. I immersed myself in writing so much this summer that it’s been harder than usual to go back, and I resent it more than ever. I’ll adjust in time, but it does feel that my writing life is full of excitement just as I have too little time to enjoy it. There are a wealth of good books out or about to be out this autumn, and other exciting things beside. Two I have managed to spot are Queer Romance Month, which has started and is packed with wonderful, thought-provoking posts already, and the Rainbow Awards, where Reawakening is a finalist (I’m still expecting an email to tell me this was a mistake and they meant to take my name off the list).

I have managed to steal some time this weekend to write, though, and finally started Raif’s book, Recovery. I’ve been reading lots about Venice, as Aliann, where Recovery is set, is loosely inspired by it (canals, shadows, nixies, ancient things that sleep in the silt, mmmmm). When it comes to research, I’m interested in atmosphere and ways of seeing a place, rather than actual historical fact, so if anyone has any recommendations for good Venice books, do leave a comment. I’ve already read Jan Morris’ Venice, and I’m drifting my way through Peter Ackroyd’s book.

I have a far more English river city to describe in this post, as I still have a few miles of the Kentish coast to describe. That said, not much of our last two walks of the summer was coastal. To reach the Thames estuary again, you have to swing inland to cross the River Medway at Rochester. The Medway towns, Rainham, Gillingham, Chatham, Rochester, and Strood, are fascinating, uneasily balanced between rich history and present day poverty. We’d finished our previous walk in a pear orchard on the outskirts of Rainham, and began there again, not sure what to expect from the day. We’d had one arduous walk and one outstanding one already that summer, and this one had the potential to be a long, semi-urban slog.

It was a delight (commentary mostly in the captions, so this may not appear properly if you’re reading on Goodreads).

A pear orchard in Kent, the Garden of England. 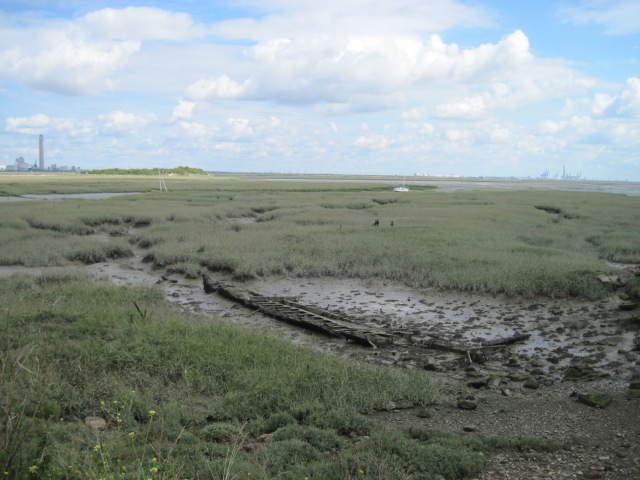 Another abandoned boat. Some locals we met along the way told us that this stretch of coast had once been home to a huge cement works. “It was cement from here,” one said, “that rebuilt San Francisco after that earthquake. It was the best cement in the world.”

Looking towards the power station on the Isle of Grain. The channels here silt up over time, and there is little left to show what a busy industrial shore this once was. 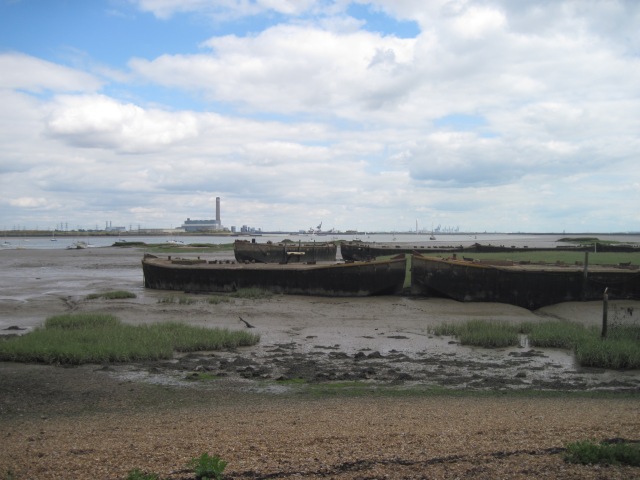 On the outskirts of Gillingham. We stopped in a park here for a cold drink. There was a funfair, and an activity day encouraging people to try out different sports, and the buzz of community spirit was a strange contrast to the marshes. 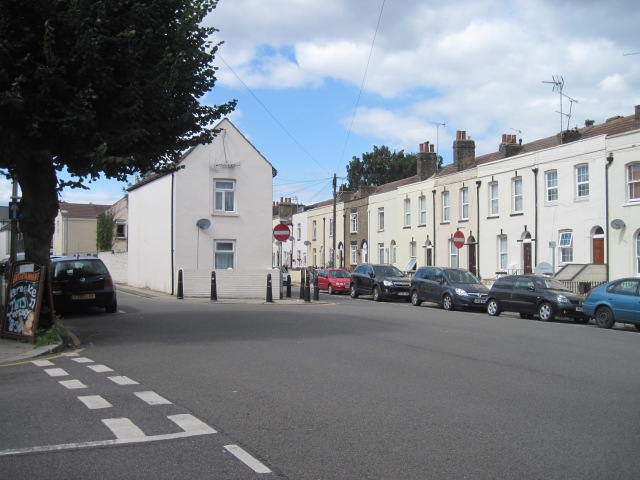 The Medway towns were Navy towns, built around the great dockyards at Chatham, and a hint of order and discipline lingers in the straight streets and smart terraces.

Leaving Gillingham, we had to climb up a long park and over a ridge to descend into Chatham. As we climbed, we kept catching sight of this ahead of us and decided to detour to investigate. By the time we were this close, we both knew what it was. There are three of these in the UK, memorials to those who died in the Navy during the two world wars. One is in Plymouth, one in Portsmouth, where we started our coast walk fifteen years ago (we visited it on our very first walk), and one here in Chatham. We hadn’t realised our path would take us so close, but we’re both history buffs and Mum can’t pass a memorial without checking it for ancestors, so we were excited to find it. 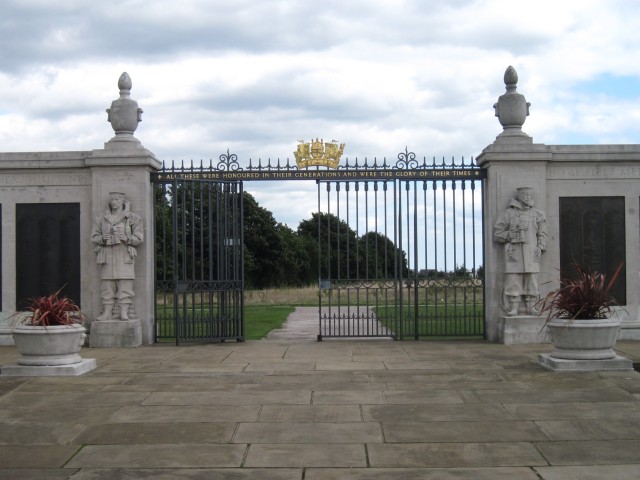 The gates of the memorial. The black plaques run around the entire circuit of the memorial and list the names of the fallen, year by year and rank by rank, from Admirals to Boy Buglers. The words over the gate read, ‘All these were honoured in their generations and were the glory of their times.’

Getting lost on the way down into Chatham, we left the park by a different exit from the one we had intended, but stumbled across a Ragged School in the process. They were a mid-Victorian charity movement to educate the children of the poor. Dickens was a patron of the movement, and this seemed very appropriate, as we were about to enter Dickens Country.

On reaching Chatham, we walked along Chatham High Street, which eventually becomes Rochester High Street. It was too busy to easily take photographs, but the modern bustle of Chatham slowly changed into the Victorian solemnity of Rochester. The houses grew taller and narrower, the pavements rose, and the shop names became steadily more erudite. Rochester claims Dickens as its own, which is a fair claim as he spent large parts of his life here and drew inspiration from the town and countryside for his books. Despite the fact that Rochester has a smashing little castle and a cathedral, you would be forgiven for thinking that Dickens was their only claim to fame. Every shop in the town centre has a Dickensian gimmick (we liked the Sweet Expectations sweet shop) or is deliberately quirky. Secondhand bookshops and antiques shops abound.

We’d been going through Rochester by train for several years to reach walks further east. The train has to slow to cross the bridge over the Medway, presenting marvellous views of the castle, which looks like a perfect sandcastle from afar. We’d decided that when we got this far on our walk, we would stop and spend a day here exploring. In the end, we stopped one walk at Rochester station, came back two weeks later to walk the short distance to Strood, which would be our next stopping point, and then came back across the river to enjoy Rochester.

Here’s the first stretch of our walk, along a waterside area which is once industrial and will soon be a housing estate, but is currently open ground. The crane remains, forlorn amongst brambles, and the mysterious vessel offshore is a so-called ‘Floating Hotel’ which appeared there a few months ago, although no one knows why. 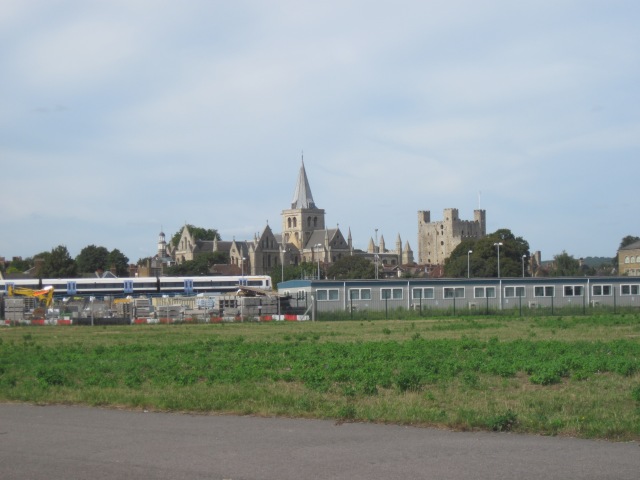 The start of the building work, a passing train, and a medieval skyline.

We crossed the river ten minutes later and finished our walk by the water near Strood station, where they have a Soviet submarine (as you do).

Rochester Castle, from the bridge.

Rochester High Street, about five minutes before my day was spoiled at the cash machine by the discovery that I hadn’t yet been paid that month, despite it being two days after payday (did I mention how much I need a new job?).

Books, books, everywhere. This one wasn’t that great, as it was overpriced, but it was one of many we visited (Mum, bless her, lent me some cash to buy books).

Rochester Castle (see what I mean? I’m secretly convinced they designed the standard sandcastle bucket to look like this).

None of the interior floors have survived, but the stairways and passages in the walls are intact.

Fairly sure this was once the great hall.

Looking down from the castle roof at the cathedral and the shoreline we had walked along. The Chatham Naval memorial is just visible on the hill slightly to the left of the spire.

Looking the other way, towards the sub and next summer’s walking.

Back at ground level, looking out toward the High Street. We were trying to decide whether to get lunch or visit the cathedral first.

The decision was made for us. The Cathedral was in use (“They have an opera singer,” we were told in tones of awe, when we stopped to ask when it would reopen. “It might be a while.”)

We had a lovely lunch in the Cathedral tearooms, caught an open top bus tour which took us all around Rochester and Chatham, via every Dickens site a double-decker can drive past, and then spent the rest of the afternoon in the museum and the bookshops, before finally dragging ourselves back to the station and home. It was the last weekend in August, and summer was officially done.