Hello from Manchester! I’ve been up here since Saturday evening, and will be travelling back the slow and interesting way over the next week. I’m not sure how good the wifi access will be, but do expect a few posts.

I was here, of course, for the UK Meet. Unfortunately, work meant I couldn’t get here in time for the first day, but I enjoyed the Sunday. Everyone I spoke to was lovely, and it was wonderful to be in a room full of people who were passionate about the same things as me. I was a little nervous about walking into a room full of strangers who all knew each other, which meant it took me a while to relax enough to start talking to people, but everyone I did talk to was lovely and next year I won’t be so shy 🙂 Sorry to anybody I missed – I completely failed at putting faces to online names 😦

Since 200 miles seemed like a long way to come for a single day, I treated myself to an extra day here, and am taking the rest of this week as a holiday. I’ve been busy sightseeing and riding trams all day. I spent most of the day in the amazing Musuem of Science and Industry. I probably only saw about three-quarters of the exhibits before my feet started to hurt too much, but it was all fascinating stuff. There was a demonstration of the various machines that turn cotton from raw fibre into woven cloth, with some very chilling stories about the dangers of the machinery, especially for child workers, an exhibit on the history of Manchester’s sewers (complete with smells), various marvellous steam and hydraulic powered machines, and lots of old aircraft. Once I’d stopped making googly eyes at their Spitfire, I hopped back on the tram and went out to Salford Quays where I spent the rest of the afternoon sitting by the water and reading contentedly.

This was one of the machines in the textiles room of the museum. I think this one spins the thread thinner and stronger. They used young children to clean the machines while they were going at full speed. This wasn’t the most dangerous one, though it could still kill someone who wasn’t concentrating fully 😦 There was one which was so dangerous the mill owners didn’t ask their workers’ kids to clean underneath it, but just went to the local orphanage and pretty much bought unwanted children to do the job for as long as they survived. Horrible stuff.

The museum buildings are in the preserved station and warehouses of the original Liverpool-Manchester Railway, the first intercity passenger railway. The preserved station is the world’s oldest surviving railway terminus. This was the line Stephenson’s <i>Rocket</i> ran along. *railway geek* 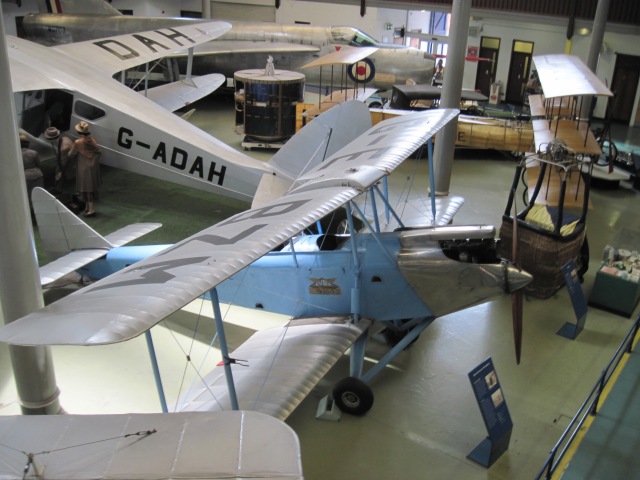 And there was also a whole hanger full of old planes and cars. The triplane in the background is a replica of the first all-British plane to actually fly, and the blue one in the foreground is an Avro Avian from the 1920s (Amelia Earhart flew an Avian). I love early aircraft – there’s an elegance and bravado to them which gets lost a little once computers and jet engines come into play.

Salford Quays these days is very shiny and modern and glossy, but you can still see the shape of the rough old port underneath. It was a nice quiet place to sit for a while, and I was only disturbed from my book by the occasional holler and splash of some local lads jumping off one of the bridges (rather them than me – that water looked filthy).

Tomorrow I head off to Buxton and the Peak District. I’ll be trying to check in, not least because my LHNB story is still in the queue somewhere (have I mentioned that here? If not, there’s a whole thread of extracts and chatter happening over on Goodreads. It has/will have flying ships and floating islands and snarky princes. I will put a proper link and blurb up here when it goes up, of course. Watch this space!).